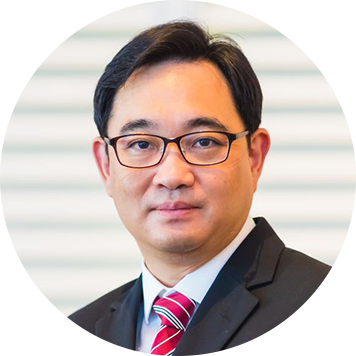 His passion has been in advancing the practice of (keyhole) minimally invasive surgery (MIS). These days, Dr Ng routinely employs MIS for both simple (e.g. appendix, gallbladder) and complicated (e.g. colorectal cancer) cases.

Dr Ng’s surgical expertise has been recognised locally and internationally. He has been lecturing regularly on his experience in MIS and also performing numerous live demonstration surgery in local and international surgical conferences and workshops. A proud moment for him came in November 2015, when Dr Ng performed live demonstration of his robotic colorectal surgery technique at an international surgical conference, the 2015 ISLCRS (International Society of Laparoscopic Colorectal Surgeons) Congress, a first for a Singapore colorectal surgeon. So far he has showcased his surgery in Singapore, Brunei, Malaysia, Myanmar, Taiwan and Indonesia.

Dr Ng’s other clinical interest is in laparoscopic hernia repair, having also achieved international recognition with regular invitations to lecture and teach. He has also performed live demonstrations of his hernia repair technique locally and internationally at numerous surgical workshops and conferences.

Dr Ng is an active contributor to the worldwide body of medical knowledge, having authored numerous scientific publications on a wide range of topics including head & neck surgery, urology, general surgery, colorectal surgery and radiology. His most recent publications are on his personal outcomes from his cancer surgery and colonic stenting.

Dr Ng has always believed that teaching in medicine is both a duty and an honour. In recognition of his academic efforts, he was awarded an adjunct professorial title since 2011. He continues to teach students and surgical trainees with a passion.